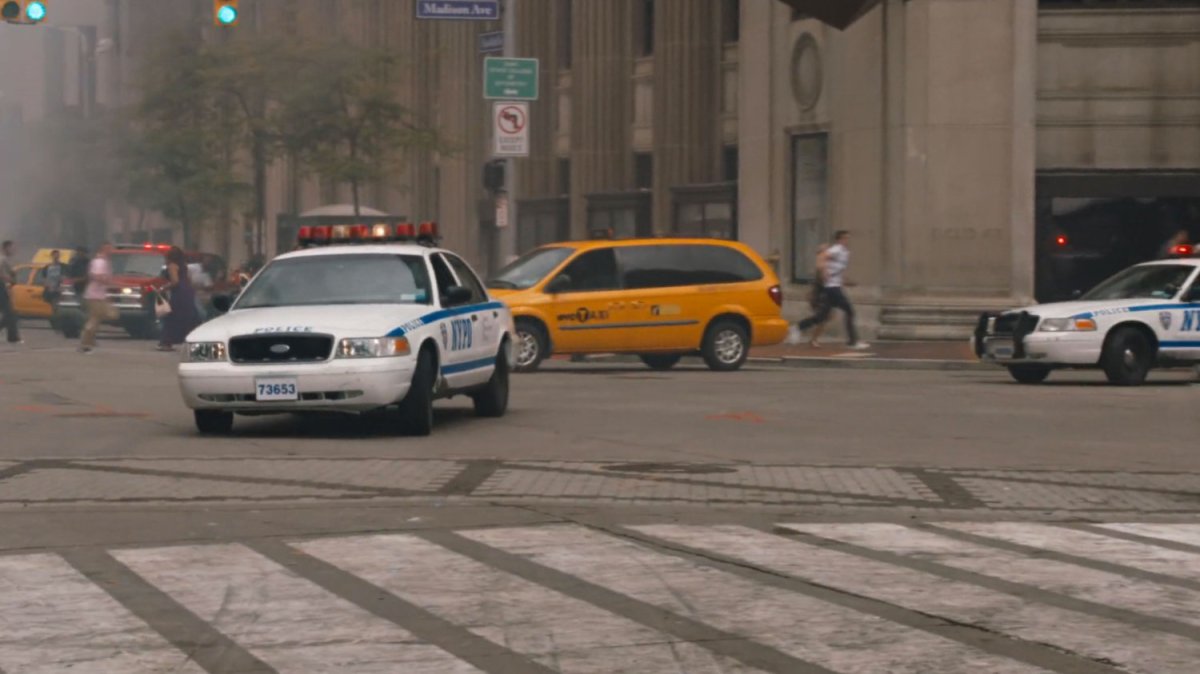 Early in the battle, the police show up at the corner of Madison and 42nd Street. Pedestrians run from the explosions of taxicabs and buildings. Like many Battle of New York shots, this was filmed in Cleveland, at the Euclid end of E 9th St.

Later in the battle Captain America shows up on 42nd St to issue some instructions to some police officers. Loki’s attack on 42nd Street blows up a Dr Pepper Truck, plus his speeders blow up a number of other vehicles in strafing run, which was also shot from this end of the street.

During an early part of the attack, civilians flee from a building under attack from the Chitauri. The building on the NE corner of E 9th St & Prospect Ave has changed since 2011 when this was filmed, but the corner here was where this filmed.

A poor hot dog vendor, who’s just trying to earn enough money to take his son to a Mets game (OK, I made that last part up), has his cart destroyed when a Leviathan crashes into a building.

This was set up just outside 800 Superior Ave, at the end of Walnut on E. 9th Street.

The National Guard enter into the city and take a stand outside the Grand Central-42 Street Station. It was filmed on East 9th St in Cleveland as a stand-in for NYC.

Captain America reports to a bank on 42nd just past Madison. There, he saves a number of people trapped by invading Chitauri, before being blown out the window. This location can also be seen in the news footage when Beth the waitress is being interviewed.

The Cleveland Trust Company building played the role of the bank in this film, and would also show up as a bank (albeit one that is run by HYDRA) in Captain America: The Winter Soldier.

After blowing up a Leviathan, Iron Man is blasted blocks away and crashes into a bus stop, before continuing the battle.

The building next to the bus stop is part of the parking structure at 999 Chester Ave, in Cleveland, OH. It was the same building used in the next two entries with the Hulk on the rooftop and the exterior of the shawarma restaurant. This is the Walnut Ave side of the building.

The Hulk is assaulted by a large Chitauri force while on top of this building. This is 999 Chester Ave, the same location where Iron Man crashes into the bus stop.

After destroying a Leviathan, by flying through it, Iron Man crash lands into a bus top and comes to a stop in front of Shawarma Palace. He then hears that a Nuke is incoming and blasts off to stop it. These New York scenes were filmed on a side street in Cleveland, next to the building at 999 Chester Ave.

Late in the battle, Thor and Captain America team up to battle the Chitauri in this section of the city, which was filmed on E. 9th St in Cleveland.

This sequence was filmed in the same street, looking the opposite direction, from the Subway Stop seen earlier (and above).